23 members of Lamorbey and Sidcup Local History Society met at Crofton Roman Villa which is situated beside Orpington Railway Station and was built in AD 140.

An excellent guide told us how the villa was discovered and excavated. He showed us the well-preserved ruins of the villa, including the heating system and some original floor tiles. He also discussed the lives of the family and slaves who lived there. We learnt that it was a farmhouse with a large area of land that was used to feed the Romans who were living in the area at that time.

Following our visit, Mike Marriott, a Blue Badge guide, led us on an historical walk around Orpington, seeing the source of the River Cray and ending at Orpington Priory. We then went for a Pub lunch and all agreed it was a very enjoyable day.

Twenty-two Society members met at 11 30am and we had a very interesting and enjoyable time.

Olive Mercer was our guide, and she talked to us about the church’s history, architecture and beautiful stained glass windows. Originally built in 1844, it has been enlarged several times to accommodate the increasing population of Sidcup. We learned that due to many windows being destroyed in the Second World War, Sir Ninian Comper designed the  magnificent replacements. The church is a jewel in the heart of Sidcup.

The church kindly provided refreshments at the end of our visit. A visit is highly recommended; as well as religious services, the church holds musical recitals and social events. A very good history of the church written by John Mercer is available to buy at the church for £5.

We enjoyed a lamp-lit tour of the caves at Chislehurst, a labyrinth of man-made tunnels up to 30 metres below the homes and woodlands above. Carved out over hundreds of years, dug for chalk and flints, they first opened to the public in 1900 as a showplace and have since been used for munitions storage, for mushroom-growing, as an air raid shelter and as a venue for concerts. 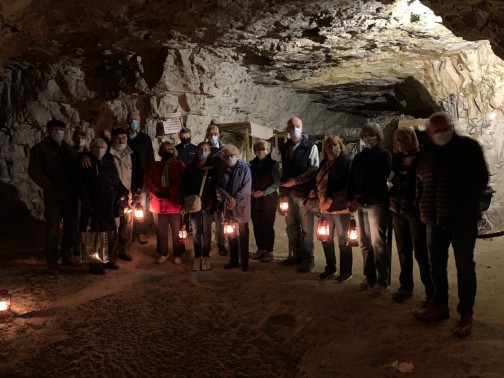 We had a group visit to Lesnes Abbey. The sizeable ruins of this abbey are in a pleasant setting surrounded by woods. We walked around the abbey ruins and the Monks Garden, and later in the woods which have some interesting features and are carpeted with wild daffodils.

Our President Malcolm Barr-Hamilton led a tour of St James Church, North Cray for our members.

Shirley McKeon reports: "The walk was open to our members and their friends and led by Malcolm Barr-Hamilton, our President. Twenty people came on the walk, meeting at 11am at the Horse and Groom Pub. We were supplied with maps dating from the 18th and 19th centuries which clearly showed the development of Sidcup as a "Victorian New Town" with the coming of the Railway in 1866. Malcolm also handed out photos of notable buildings as they were when originally built.

We ambled gently along the high street with Malcolm providing fascinating stories of people, places and events, given in his own delightful style so making history fun. Usually I go to Sidcup High Street concentrating on my shopping list and avoiding the traffic but I had time to look up and appreciate the variety of architecture, significant houses and shops as well as learning about those we have lost such as Sidcup House, Woolworths and the Cinema.

The walk finished in the Seven Stars Pub, Foots Cray, which has an interesting history as well as good food and friendly staff.  We enjoyed a tasty lunch and a drink together, completing a very entertaining morning. All agreed it was very successful, so we are planning more walks for the future."

We met at London Bridge at 11am and our leader, Mike Corley, gave us an outline of the walk which was a meander from London Bridge Station to Covent Garden and ending at The Embankment. Then off we went following Mike who brought historical sights to life. Along the way we went to Borough Market, the Thames path and The Globe, over the Millennium Bridge to St Paul’s and Fleet Street. Mike kept us entertained with so many interesting places to see and stories to listen to. We marvelled at the beautiful building of The Hop Exchange and enjoyed seeing Dr Johnson's House complete with statue of his cat.

Lunch was had in a fine old pub, The Cheshire Cheese, which was rebuilt in 1667 after the Great Fire of London. You can still see some charred beams dating from the Fire. Having been refreshed by a good lunch and good company, we went on to The Aldwych and then Covent Garden where we entered St Paul’s, the Actors’ Church, where lo and behold we found a plaque commemorating our very own Rose Bruford. We completed our London Walk by the Embankment. Having had a delightful time, full of interest and fun, we went home via Charing Cross. All agreed Mike was a fine Leader and it was a really good walk. Watch this space for our next walk.